Resources for study of Tetrahymena

Suggested search terms (to add to "Tetrahymena" in your search): 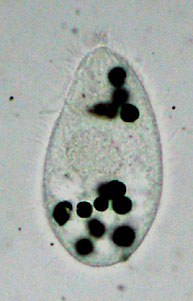 NOTE:  You cannot use information from this box of text as a cited source in a paper.  It is here to give you an overview and context.  All its facts come from articles in the left-hand sidebar of this page.

Does this give you ideas?

NOTE: You can use the information in this box as a cited source.

Starving Tetrahymena thermophila transform into a gliding elongated form when migrating from a liquid medium into gels containing 5-10% gelatine. The gliding cells are elongated up to three times when compared with the normal ellipsoid form, probably due to a mechanical squeezing of the actively migrating cells. Migration occurs in linear tracks perpendicular to the surface of the gel. The rate of migration is several hundred times slower (25–100 μm per min. at 23 °C) compared to swimming rates in liquid medium. Elongated cells can also transform into an amoebic state moving by creeping using the wedge-shaped extended anterior end to guide the cell flow.

The gliding movement of elongated cells can be directed by chemo-attractants like proteose peptone and platelet-derived growth factor. Gliding cells will return to the liquid phase when a chemoattractant is added to this outer medium.

Cells embedded in solid gelatine where they are unable to glide respond to controlled chemical gradients by orienting themselves with their long axis along such gradients indicating that the gliding movement can be oriented.

The described behaviour of Tetrahymena burrowing in soft semi-solid substrates may reflect aspects of the ecology of this ciliate and may be part of an important feeding mechanism in nature.