A compendium of resources for study of C.elegans

This article from What is C.elegans?  (n.d.). Caenorhabditis Genetics Center (CGC). College of Biological Sciences. University of Minnesota. Retrieved November 25, 2015, from http://cbs.umn.edu/cgc/what-c-elegans

WHAT IS CAENORHABDITIS ELEGANS AND WHY WORK ON IT?

AN INTRODUCTION FOR THOSE UNFAMILIAR WITH “THE WORM”.

C. elegans is a nematode—a member of the phylum Nematoda:

The roundworms and threadworms, a phylum of smooth-skinned, unsegmented worms with a long cylindrical body shape tapered at the ends; includes free-living and parasitic forms both aquatic and terrestrial. (Academic Press Dictionary of Science and Technology)

C. elegans is a non-hazardous, non-infectious, non-pathogenic, non-parasitic organism.  It is small, growing to about 1 mm in length, and lives in the soil—especially rotting vegetation—in many parts of the world, where it survives by feeding on microbes such as bacteria. It is of no economic importance to man.

Around the world thousands of scientists are working full time investigating the biology of C. elegans. Between October 1994 and January 1995, 73 scientific articles about this creature appeared in international science journals. Currently an international consortium of laboratories are collaborating on a project to sequence the entire 100,000,000 bases of DNA of the C. elegans genome. Why invest so much effort into the study of such an insignificant organism?

C. elegans is about as primitive an organism that exists which nonetheless shares many of the essential biological characteristics that are central problems of human biology. The worm is conceived as a single cell which undergoes a complex process of development, starting with embryonic cleavage, proceeding through morphogenesis and growth to the adult. It has a nervous system with a ‘brain’ (the circumpharyngeal nerve ring). It exhibits behavior and is even capable of rudimentary learning. It produces sperm and eggs, mates and reproduces. After reproduction it gradually ages, loses vigor and finally dies. Embryogenesis, morphogenesis, development, nerve function, behavior and aging, and how they are determined by genes: the list includes most of the fundamental mysteries of modern biology. (We must, alas, assume that the greatest biological enigma of all, consciousness, is absent from C. elegans—although this remains to be demonstrated!) C. elegans exhibits these phenomena, yet is only 1 mm long and may be handled as a microorganism—it is usually grown on petri plates seeded with bacteria. All 959 somatic cells of its transparent body are visible with a microscope, and its average life span is a mere 2-3 weeks. Thus C. elegans provides the researcher with the ideal compromise between complexity and tractability.

How the C. elegans project was initiated by the South African biologist Sydney Brenner can be found via the accompanying link.

C. elegans is a free-living nematode. There are two sexes: a self-fertilizing hermaphrodite and a male. The adult essentially comprises a tube, the exterior cuticle, containing two smaller tubes, the pharynx and gut, and the reproductive system. Most of the volume of the animal is taken up by the reproductive system. Of the 959 somatic cells of the hermaphrodite some 300 are neurons. Neural structures include a battery of sense organs in the head which mediate responses to taste, smell, temperature and touch—and although C. elegans has no eyes, it can respond slightly to light. Among other neural structures is an anterior nerve ring with a ventral nerve cord running back down the body. (There is also a smaller dorsal nerve cord.) There are 81 muscle cells. C. elegans moves by means of four longitudinal bands of muscle paired sub-dorsally and sub-ventrally. Alternative flexing and relaxation generates dorsal-ventral waves along the body, propelling the animal along. The development and function of this diploid organism is encoded by an estimated 17,800 distinct genes.

This information provided courtesy of Mark Edgley and the Riddle lab.

How Sydney Brenner initiated the C. elegans project (courtesy of the Avery lab). 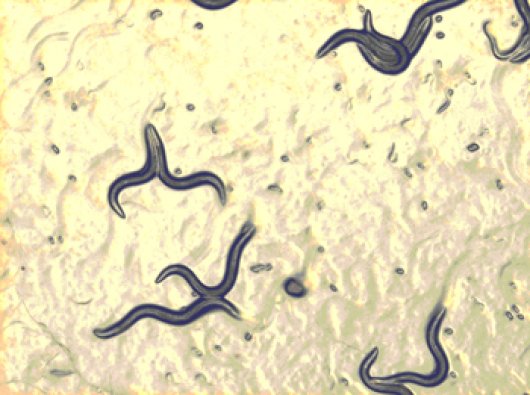